The Capabilities of the HP Multi-Jet Fusion 3D Printer

Manufacturing companies are always looking to try to find ways to increase growth, in a timely manner and low cost solutions. In this particular instance, HP Multi-Jet Fusion technology is the solution. LookReal is a company that manufactures toy dolls and is stationed in Alicante, Spain. This technology provided LookReal with the ability to create personalized toy dolls for consumers, using high detail and accuracy with optimal strength. In compliment to the following discussion, the underlying message is to explain that the type of technology and efforts described here can also be provided by Engman –Taylor Inc.
LookReal’s goal was to create “look-alike” toy dolls with the highest possible resemblance to their customers. This required a means of obtaining technology that could take a customer’s facial features and implement them on to a toy doll with the highest accuracy possible and have the ability to produce it in an effective and timely manner. LookReal’s previous efforts in production required injection molding. Injection molding is a standard manufacturing process used to create complex shapes and parts that are typically unachievable using other methods. Injection molds require time to create (about 2 months), space to store, and can customarily cost thousands of dollars. Standard manufacturing methods obviously did not make that possible for LookReal. Previous 3D printing methods would be more cost-effective, but still expensive, and lead times for production would be slow as well as the materials used would lack in any significant strength. 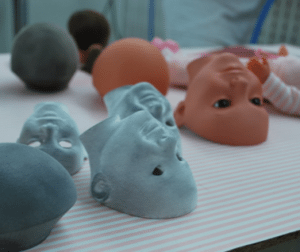 Once LookReal had the opportunity to look into HP’s Multi-Jet Fusion printing solutions, most, if not all, of their problems were answered. HP Multi-Jet Fusion provided the ability to make custom toy doll parts and accessories with high impact resistance and with highly accurate detail. As a result, the toy dolls were stronger and better looking. As a compliment, due to the high detail and surface finish created, less labor in preparation for painting of the toy dolls was needed.
When it came to decorating, the material that was used to 3D print the toy dolls was very amenable to the exposure of various types of ornamental paints. This allowed the toy dolls to be painted any chosen color. Other production efforts were available to 3D print for LookReal’s artists to aid in productivity. For example, LookReal had the opportunity to print stem supports that secured various parts for the artists to paint, permitting for increased stability when painting and a reduction in errors made. Even further, LookReal reported that a significant amount of more toy doll parts were able to be printed in the same amount of time it would take a typical 3D printer to print just one part. LookReal stated that they can now print 250 toy doll parts in 8 to 10 hours, when it would take the same amount of time to print one part using a standard 3D print method.
LookReal was able to produce “look-alike” personable toy dolls at an affordable price and reducing the overall production and cost of creation. In a sense, the HP Multi-jet Fusion printer has opened the door, for LookReal, into more opportunities, such as making prototypes and molds for typical large scale production endeavors.
The HP 4200 is now readily available at Engman-Taylor. Let Engman-Taylor bring you up to speed with 3D printing technology and allow for your company to adventure into more production opportunities.