Engman-Taylor, already well known for industrial products and integrated supply, has recently expanded their offering. In additional to value-add services like vending, tool optimization, and fluids management, Engman-Taylor now offers 3D printing as a service. 3D Parts Unlimited was originally created as a service that focuses on educating customers and manufacturers on the benefits of additive manufacturing and incorporating 3D printing into their existing process. As technology improved, so did the offering at 3D Parts Unlimited. With the help of the HP 4210 they are now able to provide customers with end use plastic components on a production scale.

IMTS 2018 was the first time 3D Parts Unlimited was an exhibitor along with MasterGraphics. MasterGraphics, a reseller of HP and Markforged printers, brands extensively used by 3D Parts Unlimited. IMTS drew over 128,000 attendees, this year, and that made for a very busy booth. With the limited time we had to wander the rest of IMTS, which was quite overwhelming, we proceeded to stop in the West Hall to see what is new with additive manufacturing. 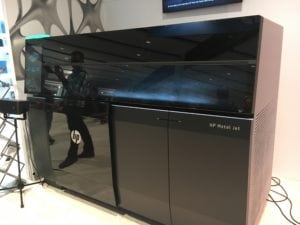 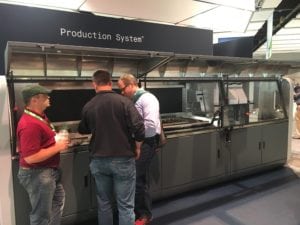 We stopped in two booths, one being HP and the other being Desktop Metal. Both manufacturers had recently announced their new metal machines, and to our surprise had the machines there and running! Metal printing is a future investment for 3D Parts Unlimited, as they see many practical applications for this technology. HP fresh off its success with the 4210, is now in the metal printing market. A very impressive, fully capable machine. Other equipment is needed for post processing like a wash station and a sintering oven and HP may offer these through a 3rd party. Desktop Metal also had their machine at IMTS which uses the same process as HPs metal machine. Their machine though is 4 times larger, which they say allows for ease of cleaning and faster printing, but is also 4 times the cost than the HP. Desktop Metal did invest into the full process though which includes the wash station and sintering station. Too early to tell which one will produce better parts, HP looks like the slicker machine, but requires additional post processing equipment.
Besides the metal machines, HP had plenty of case studies for plastic on display.
• Battery Cooling System
• Aerodynamic System (flap wings)
• Train door supports
• Painting machine arm
• Sieve swinging part
• Rudder trim
• LCD Display Case
• Gasket installation tool
• Tooling Case
• Bottle Closure
The future is bright for 3D printing for sure. Many other manufacturers have invested into this technology and their presence at IMTS 2018 shows their commitment. 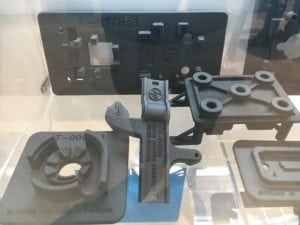 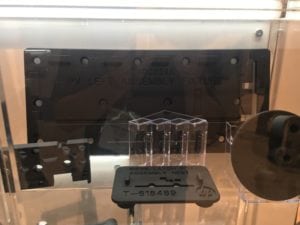 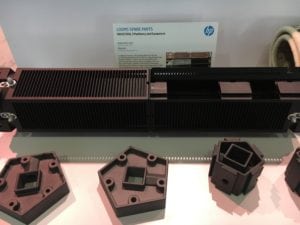